Students learn the Spanish Alphabet with this 85-slide PowerPoint full of beautiful images. The Interactive Notebook Activities cement the concepts: dictation, circle the hard and soft sounds, and more.

What Buyers have said:
~”This was such a thorough packet, and it was so nice to see alphabet activities geared towards high schoolers! Very helpful, thanks!”
~”Fun to use as an example and then have students create their own!”
~”Easy to use and very little prep which is what I want and need! Muchas gracias!”
~”Very comprehensive and well put together.”
~ “Great pronunciation included on the slides! The visuals grabbed their attention and vowel practice was helpful!” 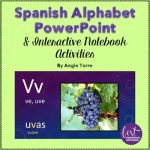 ~Student Handout on the alphabet, vowels and consonants

~Interactive Notebook Activities in which students circle the soft sounds in one color and the strong ones in another for the letters B, C, D, G, R, RR, and V and answer questions

~Dictation in which students write the letters they hear

~Instructions for the Teacher on how to use the PowerPoint

You may also be interested in: Spanish Greetings Video