French Bundle: All My French One, Two, Three, and Four Resources in One Place

Save over 20% by buying all of my French products for French One, Two, Three, and Four in one bundle. Resources include Grammar and Vocabulary PowerPoints, Illustrated TPR Stories and Speaking Activities, Interactive Notebook Activities, Lesson plans and curriculum, and Google Drive Activities.

Price
$83.28
Subject
French
Grade Levels
9-12; Homeschool
Resource Type
PowerPoint Presentations; Activities; Printables
_____________________________________________________________________
What Buyers Have Said:
~ “I am looking forward to putting many of these lessons into practice. Very thorough and practical activities. Thank you!”
~ “Huge variety of resources, useful presentations esp for review. Thanks for all your work putting these together and making them available to others like me to use!”
~ “A very comprehensive resource”
~ “Fantastic resource!”
~ “I love using slides to explain concepts to my students and the children can refer to the presentation in the classroom if they have any questions. The slides are more colourful and appealing than mine. A great resource and timesaver. Merci.” 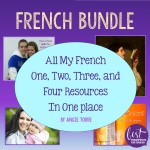 French Bundle: All My French One, Two, Three, and Four Resources in One Place Product Description:

THIS French Bundle: All My French One, Two, Three, and Four Resources in One Place IS A GROWING BUNDLE. I will be adding more resources in the future. Those who purchase before the additions will receive those products for free. Make sure you are following me in order to get the notifications.

This French Bundle: All My French One, Two, Three, and Four Resources in One Place product includes the following resources:

~How to Form Questions in French PowerPoint

~TPR Stories for French One and Two

You may also be interested in Spanish One PowerPoints and Curriculum

Click here for the Spanish One, Two, and Three PowerPoints and Curriculum Mega Bundle

Click here to read about Using Videos for Comprehensible Input.

Be the first to review “French Bundle: All My French One, Two, Three, and Four Resources in One Place” Cancel reply

This website uses cookies to improve your experience while you navigate through the website. Out of these, the cookies that are categorized as necessary are stored on your browser as they are essential for the working of basic functionalities of the website. We also use third-party cookies that help us analyze and understand how you use this website. These cookies will be stored in your browser only with your consent. You also have the option to opt-out of these cookies. But opting out of some of these cookies may affect your browsing experience.
Necessary Always Enabled

Any cookies that may not be particularly necessary for the website to function and is used specifically to collect user personal data via analytics, ads, other embedded contents are termed as non-necessary cookies. It is mandatory to procure user consent prior to running these cookies on your website.