This 130-slide Spanish Ir, Venir and Places PowerPoint, TPR Stories and Activities is a complete lesson on the verbs “ir” and venir.

Buyers have said:
~”Great power point! My students loved the TPRS story, they were all engaged. They thought it was funny!”
~”As always – useful and fun – thanks!”
~”My students loved reading the stories!” 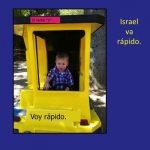 This 130-slide Spanish Ir, Venir and Places PowerPoint, TPR Stories and Activities is a complete lesson on the verbs “ir” and venir and includes the following:

The “Spanish Ir” PowerPoint ends with two TPR stories. The first TPR story is about a girl who meets a cute boy at the gym but finds out that….. The story uses the verbs “ir” and “venir” multiple times.

The second TPR story is about a girl whose boyfriend breaks up with her and goes out with another girl. She doesn’t handle it very well and so she… The story uses many examples of “ir + a + infinitive” to talk abut what the ex-girlfriend is going to do.

The supplemental activities include the following:

~Interactive Notebook Activity in which students write, “Es lógica”, or, “No es lógica”. If the sentence is not logical, they write a logical sentence using the verb, “Ir”.

~INB activity in which students answer questions using the structure, “Ir + a +infinitivo”

~Group Activity/printable designed to reinforce the use of the verb “ir” and the places. Students ask and answer questions about where they would go.

~Scavenger Hunt in which students ask and answer questions using the construction, “ir + a + infinitive”

~Activity in which students complete the sentences with the verb, “ir,” and, “al,” or, “a la”